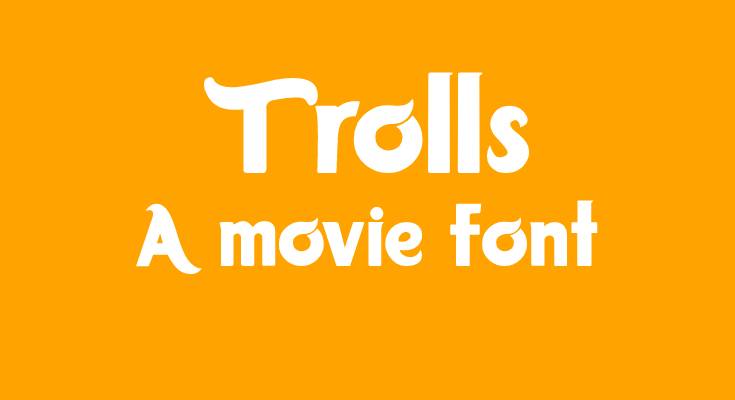 Trolls Font Free Download to add extra edges in your movie titles. It is best to use in different fancy designs.

The Trolls font is based on an American animated comedy film known as “Trolls Dolls” directed by Thomas Dam in 2016.

This font is also searched as the Trolls movie font. Due to its glittery, yummy, glossy graphics and general design, people are curious to search about this fancy font for their needs.

Trolls font would also look much vibrant and luminous if you redesign it using graphics editing software, giving a 3d texture similar to the Film title cover. The most resembling font to the Trolls movie font is Tang font.

Trolls font is best for display if you are looking for something that could catch anyone’s attention with its beautiful three-dimensional characters that give bold square-shaped strokes at the edge of the letters & makes this font attractive.

Since the Trolls font is used in an animated children’s film, you can generalize that the font attracts kids.

This was the sole idea for designing this font; therefore, this fancy type of font is best for the display content for children’s party whether it is a banner, a small stall, a food court, birthday cards.

This font can also be a good idea for graphics of merchandise like t-shirts of kids and display packaging of toys.

Moreover, if you have a brand and need a casual logo or an informal, friendly-looking representative font, then Trolls font is highly recommended.

Trolls Font Free Download link is given below. Just click on it and start downloading it. Unzip the file and start using it in any design software like Adobe Photoshop, illustrator and Corel draw.

You can also use it for video titles and lower thirds to add extra edges in the video.