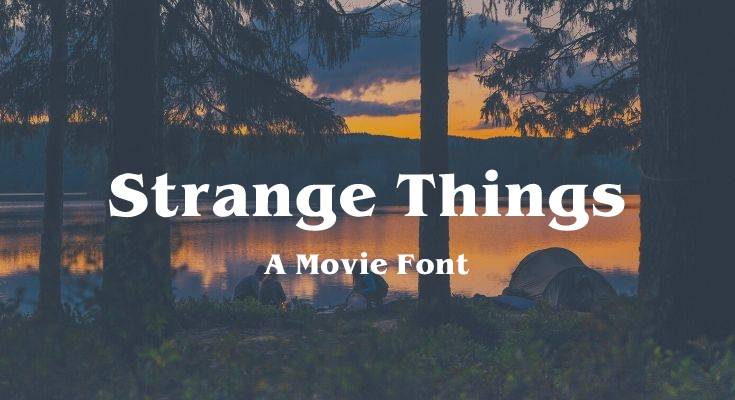 Are you looking for the stranger things font free download? You’re at the right place to download this famous font.

Stranger Things has been one of the top-most-watched seasons on Netflix but let’s get started from where it began.

So, before actually watching the season, the viewers must have seen the official cover of the famous season.

They must have noticed the font because there was no emphasis on the main characteristics of the actors or casts on the cover, but the only thing which made people click to check out the season was the actual font dedicated for its body.

The Stranger Things Font Free Download is here to get quickly.

Since the font gave a mysterious, magical, or you may call it a wizard type of spooky solid vibe. The stranger things font gives most resembles the ITC Benguiat Font.

The stranger things font comes with two weights is the uppercase, and lower case characters consist of only bold format as seen on the season’s cover to give more appeal.

The stranger thing font gives a powerful, sturdy look with sharp strokes at the edge of every letter. The baseline and the head of each letter have been set to a uniform length to keep it in a disciplined manner and prevent the letters’ orientation.

The most prominent feature which defines the attributes of the stranger things font is the design of every letter. For example, the middle bar or the base making the letter A is slightly curved to give it a distinct look compared to average A with a straight baseline at the bottom completing the A letter.

The internal cavity of the letter G has no internal folding rather a straight vertical solid bar.

The bar middle horizontal bar connecting the two vertical parallel bars of the letter H is pushed to the top rather than kept in the middle, giving a gothic vibe that looks pretty similar to the letters of batman movie fonts.

This awesome font is best for the catchy display of covers, for example, commercials and graphics. It is recommended for the headings of any informal project.

You can directly download The stranger things font by clicking below. After The Stranger Things Font Free Download, you will be amazed and start using it with design tools and software like Photoshop and illustrator.