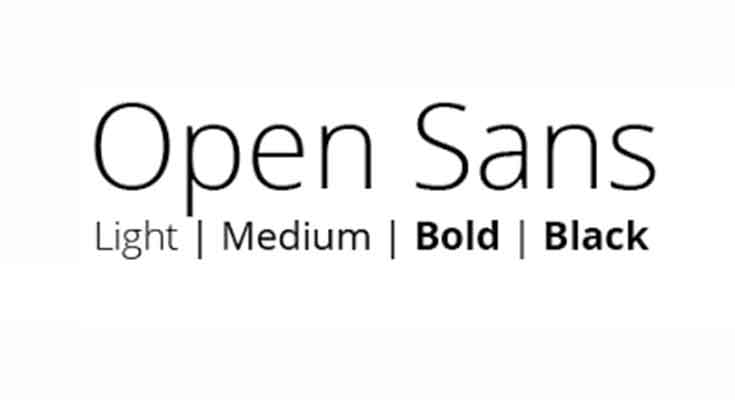 Open sans is a humanist typeface designed by Steve Matteson and authorized by Google. As a regular Google user, you must be very familiar with this font as it is used in some of Google’s web pages as well as its print and web advertisements.

According to Wikipedia, as of July 2018, it is the second most served font on Google Fonts, with over four billion views per day on more than 20 million websites.

The Open Sans font is designed after being inspired by a Droid Sans typeface, a font family that originated to be used in small size texts and was designed by the same designer Steve.

Open sans font is a flat design typeface with an edgy design and remarkable impact. There are two font families included: regular, which looks like traditional lettering; plus outline for more modern applications where sharp corners will be present or desired but not necessary on printed goods such as signs & products because they’re rounded out nicely without them.

The design was created specifically to be an interface language for Android phones, so users can easily read what they’re clicking on without difficulties comprehending the content.

And in terms of usage, it’s truly a universal and versatile font. You see it across all different platforms. Let’s mention a few just to show you how popular Open Sans is.

As mentioned, Google web pages all use this font as well as Wordpress sites.

You can download the accessible version of this font from our site in zip format and use it on any project you want. Be ready to let this powerful and popular font to take your endeavor to the next level.