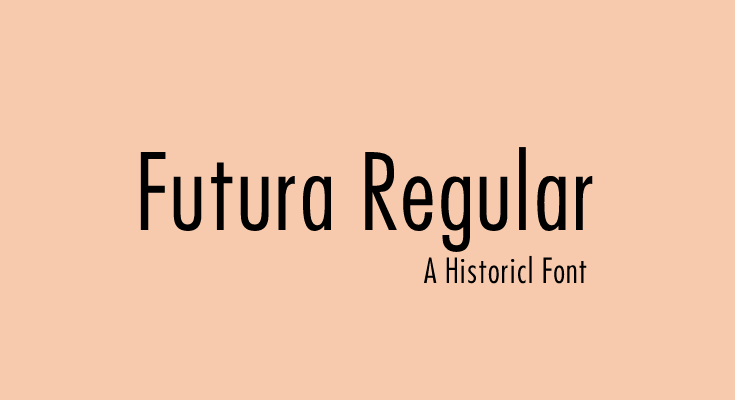 Futura regular font is classified as a steady, modern, elegant type of font design with a geometric San-serif typeface. It was designed by Paul Renner & released in 1927 by Bauer Type foundry. Now you can download it free within seconds.

It was primarily designed to offer a contribution to the Frankfurt project in 1930.

Futura Regular offers a very professional baseline dedicated to giving a blend of retrospective with a futuristic type of feel to the text.

Futura Regular’s appearance is emphasized by round geometric shapes. It has both uppercase and lowercase formats. It is noticeable when you focus on the letter Q with the round shape of it making it a perfect round spherical geometry, similarly the letter C is completely round over the left side.

The letter R consists of straight oblique support at the bottom the one which distinguishes it from the P letter.

The height of all the font seems to be in a uniform fashion, eliminating all the unnecessary decorative details such as curls or bending strokes at the edge of each letter.

Futura Font is designed to give more of a decent and subtle appearance which allows the letterhead to remain in balance.

Since Futura Regular was a huge success due to the fusion of modernity and classicism thus it sparked a wide range of geometric sans-serif typeface derivatives which were owned by its competitors.

With a reference to history, Futura appeared in the Nazi documentation such as “Organisationsbuch der NSDAP”.

It was actually an informative handbook written for the instructions to join the Nazi party & on posters as well which were supporting “Entartete Kunst” meaning “Degenerative Art” which was an exhibition held by the Nazis to emphasize shame on modern art in 1941.

Futura font is utilized on a daily basis being a headline or a body text.

It was commercialized by many famous names and brands including advertisements and logos such as on, IKEA a Swedish multinational conglomerate till 2010, the famous brand name logo of SUPREME the New York-based skateboarding merchandise brand, Volkswagen, Shell gasoline, Crayola, Swissair & HP in their advertisements.

Download Futura regular font just by clicking over the Download Now button below. You will be amazed at this historical font. After downloading, start to use it with any tool.