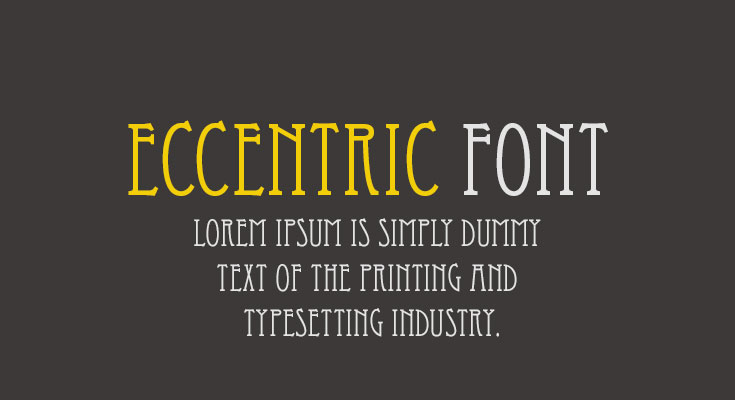 Eccentric Font, a definition of pure elegance which has a fantastically designed typeface that gives a revolutionary perception with a crossover of mysterious, gothic, and professional characteristics which enables you to put in your projects.

It gives a condensed format to your texts which look much similar to the Batman Gothic-themed fonts.

Eccentric font was designed by Gustav F. Schroeder in 1894, and it was released by the Lanston Monotype. Gustav is one most amazing typeface artist creating fonts like Romana, De Vinne & EF Romana.

Monotype is a franchise to the best and most diversified top class, highly used fonts you can find on the web, programs, and software, including Arial, Futura, Times New Roman, Helvetica, and many more like Gill Sans and Macklin.

The highlighted feature of the Eccentric font is the formation and craft, which gives your letters an orthodox, dark-styled theme since it is designed in this specific manner, that all the letters appear condensed with simple cuts the edges.

The designer has also added a unique type of sharpness to the letters as well to give it a firm look.

The Eccentric is a multi-platform font due to its grotesque vibe. This font can be used for over a wide extension of projects, including film covers, web displays, illustration, textual animation, large-scale ads, and textual logos.

It can be used to make flyers, book covers, magazine covers, and brochures, among other things.

Font clarity is one of the best features of the Eccentric font, which is designed with deliberate spacing between each letter and a lot of emphasis in every stroke to make it as clear as possible.

The eccentric font is one of the most attractive fonts available online, the aesthetics of this font quite sufficient enough to draw the attention of the viewers when it is used over a large-scale display.

The designer of the Eccentric font has added an ideal level of sharpness to it design inputs high texture quality which makes it recommended for all printable formats like fabrics, plastic, metal and leather material.

We hope you’ll love our fonts, do not hesitate to reach us out!